It is easy to overestimate the importance of one defining moment and underestimate the value of making small improvements on a daily basis.

Meanwhile, improving by 1 per cent isn’t particularly notable—but it can be more meaningful in the long run. The difference a tiny improvement can make over time is astounding. Here’s how the math works out: if you can get 1 percent better each day for one year, you’ll end up thirty-seven times better by the time you’re done. Conversely, if you get 1 percent worse each day for one year, you’ll decline down to zero.

The same way that money multiplies through compound interest, the effects of your habits multiply as you repeat them. They seem to make little difference on any given day and yet the impact they deliver over the months and years can be catastrophic.

Success is the product of daily habits—not once-in-a-lifetime transformations. That proverb states that it doesn’t matter how successful or unsuccessful you are right now. What matters is whether your habits are putting you on the right track or not. If you’re a millionaire but you spend more than you earn each month, then you’re on a bad trajectory. If your spending habits don’t change, it’s not going to end well. Conversely, if you’re broke, but you’re saving a little bit every month, then you’re on the path towards financial stability even though your progress towards it may look slow.


Do you want to stand out from the rest in this world?


If you find yourself struggling to build a good habit or break a bad one, it is not because you have lost your ability to improve. It is often because you have not yet crossed the Plateau of Latent Potential.

We often expect progress to be linear. At least, we hope it will come quickly. In reality, the results of our efforts are often delayed. It is not until months or years that we realise the true value of our previous efforts. This can result in a “valley of disappointment” where people feel discouraged after putting in weeks or months of hard work without experiencing any results. 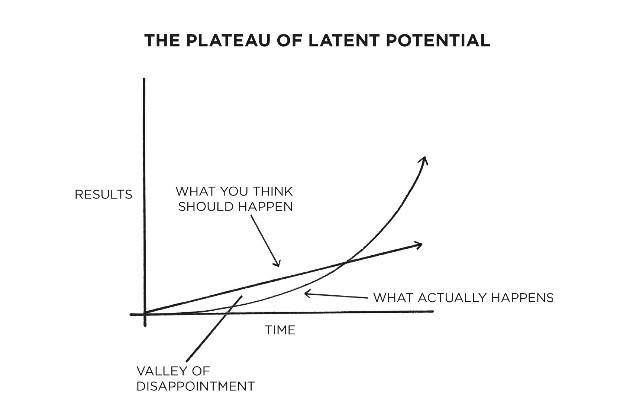 However, this work was not wasted, it was simply being stored and soon you will understand the full value of previous efforts. When you finally break through the Plateau of Latent Potential, people will call it an overnight success. The outside world only sees the most dramatic event or the final picture rather than all that preceded it.

Small changes often appear to make no difference until you cross a critical threshold. The most powerful outcomes of any compounding process are delayed. You need to be patient.


Do you Want to Stand out from the Rest in this World?